In April of this year, a few weeks into California’s COVID-19 lockdown, I wrote a poem about a little parlor that sits at the back of Artisan’s Patio, an alley that cuts into the middle of one of the busier blocks of Hollywood Blvd. Built in 1914, the Patio once boasted of speciality bookstores and avant-garde haunts like Clara Grossman’s American Contemporary Gallery, where, in the early 1940s, the teenaged Kenneth Anger and Curtis Harrington could rub elbows with Oskar Fischinger and the doddering D. W. Griffith. Now the alley mostly hosts souvenir shops, but it is also home to the impressively well-stocked As the Record Turns and the hallowed Hollywood Movie Posters, the subject of my poem, which first opened its doors over four decades ago. I took a walk down Hollywood in late March. It was midday, and the boulevard was completely deserted. The gates of the Patio were locked and I could barely make out the lettering on the sign at the back. I stood there for some time, stupefied. Eventually I snapped out of it, took a couple of photos, and went on my way.

The Onegin stanza that came out of that encounter, “Universal Horror,” was accepted for publication by a poet I greatly admire, A. M. Juster, whose latest collection, the marvelous Wonder and Wrath, is out this month from Paul Dry Books. Appropriately enough, my poem appears in the October issue of First Things — though there won’t be much trick-or-treating this year, of course. I extend my deepest thanks to Dana Gioia for pushing me deeper into the subject, to Mike Juster for taking a chance on the poem, and to Patrick Kurp for giving it more attention than it deserves at Anecdotal Evidence.

As our era’s horrors keep adding up, I look with ever greater hope to the work of Julia Nemirovskaya, who offers one poetic remedy after another. Today, I am happy to say, two more of Julia’s indispensable “object poems” have made their debut in translation. They appear in the visually enchanting and congenially named new journal Pocket Samovar, which is edited by Kate Shylo and Konstantin Kulakov. The first, “Kin,” presents the moon — that mainstay of verse — as I’ve never seen it before, while the second, “Flu Remedy,” is good for what ails just about any of us. I was asked to recite the poems, and the videos are posted above the texts on each page. If my readings don’t put you off, you can also hear four more of Julia’s poems below, courtesy of the wonderful YouTube channel Translators Aloud, curated by Tina Kover and Charlotte Coombe.

6 thoughts on “Universal Horrors and Remedies”

My Hollywood and Other Poems (Paul Dry Books, 2022) 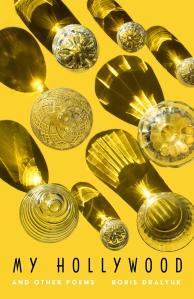 My Hollywood and Other Poems is a collection of lyric meditations on the experience of émigrés in Los Angeles. In forms ranging from ballades to villanelles to Onegin sonnets, the poems pursue the sublime in a tarnished landscape, seek continuity and mourn its loss in a town where change is the only constant. My Hollywood draws on the poet’s own life as a Jewish immigrant from the Soviet Union, honors the vanishing traces of the city’s past, and, in crisp and evocative translations, summons the voices of five Russian poets who spent their final years in LA, including the composer Vernon Duke.